Not to be confused with the Ruby Birthstone.

Ruby is a Rhinoceros believed to be the Alpha/Shaman of the Rhinoceros; however, Animal Jam Headquarters hasn't fully confirmed they are one.

They seem to look strong and muscular, with their eyebrow bone pointing down as if angry. With long pointed ears for a Rhinoceros avatar and two sharp-pointed horns, the front horn seems to look like a replacement since it has a rope hanging around it; although it could just be decoration. They have four rectangular flecks on their cheek-bone. 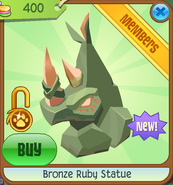 Add a photo to this gallery
Retrieved from "https://animaljam.fandom.com/wiki/Ruby?oldid=1361823"
Community content is available under CC-BY-SA unless otherwise noted.