300 Gems
The 6th Birthday Cake is a non-member den item. It was released on September 1, 2016, and could have been previously obtained for a limited time only by entering the Code "AJBDAY6" in the game. The code has since been deactivated and no longer works.

The cake is a silver cake with grey sides, white icing on the edges, and a large, yellow, number-six candle. This item comes in one variety.

Click the candle's flame for the second golden tier to pop up.

Click the far-right golden leaf for chocolate "boxes" to appear underneath.

Click the middle of the frosting on the forward-facing chocolate "boxes" for the golden cylinder to pop up.

Click the left side of the top stripe on the golden cylinder for the dark stone-gray cake to appear.

Click the top right corner of the dark stone-gray cake. The cake is now in its final form with the addition of the Mira-like wings at the top.

The cake bursts into flames and returns to its original form. 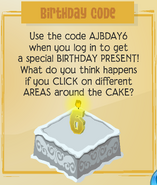 An advertisement for this item in Jamaa Journal
Community content is available under CC-BY-SA unless otherwise noted.
Advertisement