300 Gems
The 9th Birthday Cake is a non-member den item. It was released on September 5, 2019, and was obtainable for a limited time only be entering the Code "AJBDAY9" into the game.

The first stage of the 9th Birthday Cake is white with blue frosting decorating the top edge. There are nine ice cream cones, all of which have cherries on top, but vary in flavor. There are two purple with sprinkles, two vanilla, two vanilla with a fudge sauce around the top, two chocolate chip ones, and one chocolate nut. These surround a large golden nine topped with a candle. This item comes in only one variety.

When clicked on the most left cherry, another layer is added that is chocolate with a darker frosting lining the top edge. This layer is topped with four stars on red sticks.

On its third form, a pink and white striped layer is added, and is topped with five small candles. Click the top right star to get to this transformation.

The fourth stage adds a light blue layer with lighter frosting lining the top edge and middle. Click the leftmost candle on the pink layer to get this transformation.

The sixth layer adds a green and white striped layer that is white on top. It is topped with four small candles. Click the rightmost candle on the pink layer to access this transformation.

On its seventh form, a small purple version of the blue layer is added and is topped with two sparklers: one yellow, and the other red. Click the middle cherry to access this transformation.

In its eighth form, an orange layer is added. It has a brown band along the top and bottom edges. Click the bottom left star to get to this layer.

The final layer adds a small chocolate layer topped with a darker brown frosting. This is activated by the bottom right candle on the green and white layer.

To reset the cake, click the flame on the nine in the cake's final form. The cake disappears in a burst of flames and goes back to the first form. 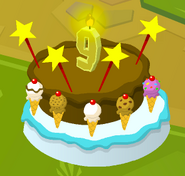 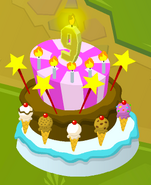 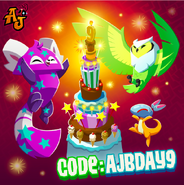 A photo from The Daily Explorer.
Add a photo to this gallery
Retrieved from "https://animaljam.fandom.com/wiki/9th_Birthday_Cake?oldid=1459535"
Community content is available under CC-BY-SA unless otherwise noted.