The item is a flat black box with the Animal Jam Classic logo on top of it. To the front of the console is a gray button and a darker gray flap, while on its side is a vent-like dent. In front of the item is a black game controller with two joysticks and a plus-shaped button. This item comes in only one variety. 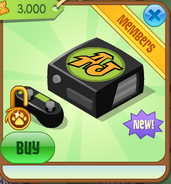 The AJ Classic Game Console with no name 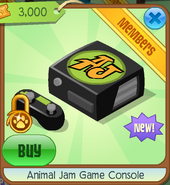 The old name
Community content is available under CC-BY-SA unless otherwise noted.
Advertisement