The AJ Melody is a non-member music for Dens. It was the first music in Animal Jam, introduced during Beta Testing.

The icon for this music shows a large "AJ" logo in yellow with a brown outline as well as small dark yellow music notes in the background.

This music has a relaxing melody with a slow rhythm. It features a wind instrument, possibly a flute, playing the main melody with various slow drum beats in the background followed by a segment that also includes a group of string instruments. 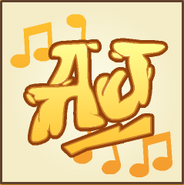 An enlarged version of the icon of AJ Melody.

A glitch where the music icon appears in a den

AJ Melody glitch in den (Not being edited)
Add a photo to this gallery
Retrieved from "https://animaljam.fandom.com/wiki/AJ_Melody?oldid=1251520"
Community content is available under CC-BY-SA unless otherwise noted.