View source
Not to be confused with the Rare Alien Antennae Mask, Intergalactic Antenna, or Space Camp Antenna Mask.

195 Gems
The Alien Antennae Mask is a members-only land clothing item. It was released on October 15, 2016, and is sold seasonally during the Night of the Phantoms. It was first released at Jam Mart Clothing, but it was relocated to Epic Wonders in 2017.

The Alien Antennae Mask is a futuristic helmet that has a pair of large antennae attached to the top. The front of the helmet has a thin, colorful visor that runs from ear to ear across the eyes. Extending down the middle of the helmet is a strip of glass bumps. Colorful rings extend out from the antennae and become animated when worn. This item comes in eight different color varieties. 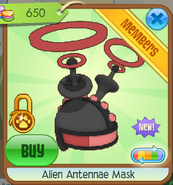 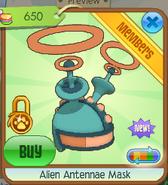 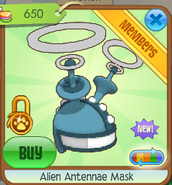 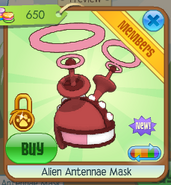 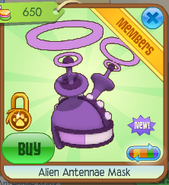 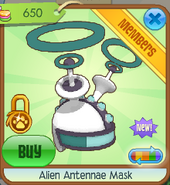 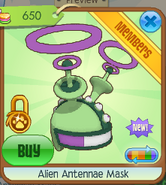