View source
Not to be confused with the Ancient Alpha Armor.

1,500 Gems
The Alpha Armor is a non-member land clothing item. It was released in August 2017 and can be redeemed from the code that comes with the ultra rare Sharpjinx as part of the Adopt-A-Pet Eclipse houses.

The Alpha Armor is an icy blue armor with two wings attached to it. Each wing is three separate segments that increase in length starting from bottom to top. At the tip of each wing is a diamond like, purple gem embedded into the top. Above it, is a leaf like decoration. This item comes in only one variety.

When a Fox wearing the item engages in play.

A glitch that happens for a second when a Coyote dances. 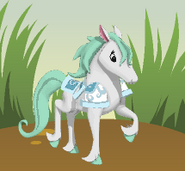 Wings on Alpha Armor not showing up on Arabian Horse
Community content is available under CC-BY-SA unless otherwise noted.
Advertisement