1,500 Gems
The Alpha Sword is a non-member land clothing item that is worn on the back. It was released sometime during May 2016, and it is rewarded as a gift after obtaining 96 unique Adopt A Pet toys on the Adopt A Pet Checklist.

The Alpha Sword appears as a long broadsword that has an "icy" color scheme, evident from the uses of light blue, sky blue, and purple. The sword itself has mysterious swirled markings etched into the blade. The portion leading up to the hilt appears to be symbolic of a glacier. On the sides of the hilt, there are icicle-like spikes protruding outward. The gem in the center is a dark lavender along with clear purple swirls, which stands out among the other details of the sword. The remainder of the hilt is sectioned by nodes and has a single icicle at its very end. The top of the sword is also notched. This item comes in only one variety. 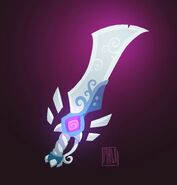