2,250 Gems
The Alpha Training Mat is a non-member den item. It was released in February 2017 and is rewarded as a gift after obtaining 120 pets on the Adopt A Pet Checklist.

This item is a large tan mat with a shape of a yellow target in the center. At the corners of the mat, there are small box patterns with torches on top. In the first two corners, there are two tall torches. Between two of the torches, there is a large vase holding three staffs that resemble the Healing Staffs. Lying between the tall torches, there is a bench that is partially covered by a red cloth with a golden border and a golden circle in the middle. This item comes in only one variety. 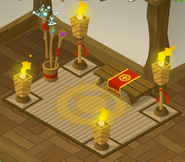 A detailed view of the Alpha Training Mat in a den 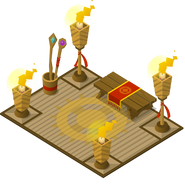