View source
This article is about the Unity game. For the Flash game, see Animal Jam Classic.

It has several new features for Jammers to enjoy, including enhanced graphics, a 3D world, and much more. The Unity Engine is used for this game.

Starting in November 2017, Animal Jam introduced an "AR" (Augmented Reality) feature that works by overlaying game-play elements onto a video that is captured from the device's camera in real-time. As a result, it appears as if parts of the game are actually in the real world. It was originally only capable of overlaying animals, but it was updated during the Summer of 2018 to include den items and pets as well. The different elements rendered on the screen can be interacted with using various controls. The feature is available for devices that run iOS version 11 or higher.

Just like Animal Jam Classic, the primary currency in the mobile game is Gems. However, Animal Jam uses Sapphires as their premium currency instead of Diamonds.

Sapphires were first introduced during Animal Jam's Beta Testing and were removed when the game was officially released only to be later re-introduced in December 2015. Sapphires can be won from the Daily Spin, Treasure Hunts on 'Sapphire Wednesdays' (formerly), or bought with real money through in-app purchases. Animal Jam Classic players with Membership can also log in every day to obtain five free Sapphires.

Currently, New Jammers can choose from the Bunny, Monkey, Fox, Tiger, Panda or Wolf when they first start the game and those animals can also be purchased with Gems. Other animals are available through special bundles or purchased in the Sapphire Shop.

The main shops are spread across each area in the game. These shops include Animal Jam Classic items seen in the original colors and new colors. There are also new clothing, wallpaper, flooring, and den items not yet available in Animal Jam Classic.

Unlike Animal Jam Classic, flooring and wallpaper options are not sold with the furniture in Play Wild. Instead, they each are sold in their own separate shop stands within the furniture store.

Jammers can purchase and wear a variety of clothing accessories, which changes depending on the season, to decorate their animals. The clothing is grouped into categories for items worn on the head, face, neck, back, tail, and feet. However, some of the face and head items cannot be worn at the same time. Some items worn on the tail, like those found in Animal Jam Classic, are not yet available in Play Wild, because Play Wild is newer and is limited to an app, and mobile devices have less storage than computers.

The only den available when Jammers first start is the Small House den, which is based on the Animal Jam Classic den with the same name. Premium dens are also available to purchase using Sapphires. Jammers can decorate their dens with a variety of furniture items and then allow other players to come to visit their den, just like in Animal Jam Classic.

There are a number of music tracks that can be purchased from the Sapphire Shop. Once obtained, these tracks can be activated in the player's den to play that music in a loop.

Pets can be purchased from the Sapphire Shop or from Claws 'N Paws in Appondale. Once obtained, a pet will follow the player's animal avatar or play with any nearby toys made for that type of pet.

There are many den items available for purchase and some of them are exclusive to certain seasons. Den items are categorized as either wallpaper, flooring, plants, rugs, plushies, decorations, seats, or devices. Many of the items in the seat category can be clicked by Jammers to cause their animal to automatically sit in the seat.

When Jammers place these items in their dens, they can be rotated up to eight times to see all the sides of the item, unlike Animal Jam Classic which only shows one side of the item and it can only be flipped horizontally. Also, certain items can be stacked on top of other items, such as the Swirly Pillow and Striped Pillow, to create unique walkways and layouts.

These are the current areas that are available in the game, Play Wild.

The other areas that can be found in Animal Jam Classic (such as Crystal Reef, Bahari Bay, Kani Cove, Deep Blue, and Balloosh) are yet to be added to Animal Jam. There are no aquatic animals yet.

There a number of Animal Jam Classic based places that can be entered from the main areas:

Some of the Animal Jam Classic places can be found in Animal Jam, but they are boarded up and have a "Coming Soon" sign on them such as the Flag Shop, the upper floors of the Chamber of Knowledge, the Conservation Museum, and the Art Studio; these are expected to come out in later updates.

There are also secret rooms located in most of the main areas around Jamaa. These rooms can only be accessed by a certain animal. Each secret room has an exclusive statue, item, and arcade game that can be bought:

There are several mini-games available to play that are very similar to their Animal Jam Classic counterparts:

[[File:Play-Wild_Phantom-Runner_Gameplay-1.png|thumb|A Play Wild exclusive game, Escape the Phantoms.] However, some of the mini-games are unique to Play Wild:

The Photo Booth can be found with a coming soon sign across it, meaning that it will also be available in the future. But photos can already be taken using the picture option.

The party system is very similar to the one found in Animal Jam Classic: each party takes place in a themed room and lasts for thirty minutes. Additionally, some parties are exclusive to a certain season or a certain event. Unlike Animal Jam Classic, however, there are typically only six parties during a given day and they repeat in the same order every three hours.

Packs are groups of Jammers that the player can join. Inside of the pack, Jammers may do Pack Runs with other Jammers to collect Fireflies, Beetles, Ladybugs, crabs, crops, pumpkins, or presents, which will put their pack on the leaderboard if it has enough. The maximum amount of Jammers that can join a pack is 25.

Despite being based on Animal Jam Classic, there are a number of features that have not yet been added to Animal Jam.

One of the major differences from Animal Jam Classic is that Animal Jam's concept of Membership is different. There are some members-only items, but no members-only dens or animals. Instead, there is a premium shop with in-app purchases (for benefits, such as exclusive items, animals, and dens) that can only be received with real money. Members can, however, win 5 free sapphires every day and get a free weekly member's gift. Packs have been added as a members-only feature.

There are no oceans areas available as of yet. As such, there are also no ocean-related games, items, dens, or animals available either. However, the oceans areas are seen as places on the Treasure Hunt map.

A photograph taken in the Dance Party, seen on the Photo Album feature. 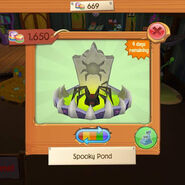 Spooky Pond sold during the Night of the Phantoms update 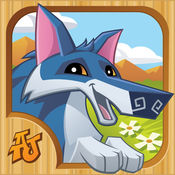 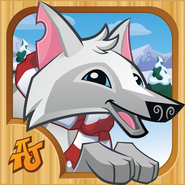 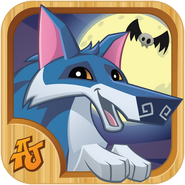 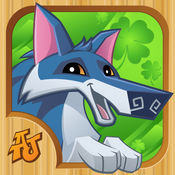 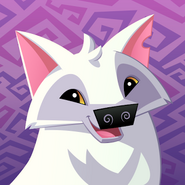 A player sitting next to the Gem Tree in a Cosmo-aligned Pack Hideout.

In the Jamaa Journal during Night of the Phantoms, Animal Jam is mentioned as an advertisement.

In the Jamaa Journal during the Jamaalidays, Animal Jam is mentioned as an advertisement.
Community content is available under CC-BY-SA unless otherwise noted.
Advertisement