View source
Not to be confused with the Painter's Easel or the Art Class Easel.

45 Gems
The Art Easel is a members-only den item. It was formerly available during the Beta Testing, but it was removed from stores shortly after Beta Testing ended.

The Art Easel is a brown wooden easel that is leaning to one side with three thick legs. A large white sheet of paper is held on by a large clip at the top of the easel. Balanced on a wooden ledge at the bottom of the easel are two larger pots, which are colored mustard yellow and fuchsia, as well a third, smaller pot that is colored blue; they are presumably filled with paint. This item comes in only one variety.

The Art Easel can be won as a possible prize from the following locations: 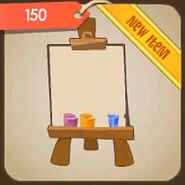 The item seen during Beta Testing. 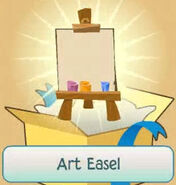 An Art Easel being received as a gift.
Community content is available under CC-BY-SA unless otherwise noted.
Advertisement