View source
This article is about the den item. For the Graham's Workshop currency, see Bamboo (Resource).

The Bamboo consists of three blades of bamboo coming out of a clear pot with rocks at the bottom. The pot is assumed to be filled with water and pebbles. This item has only one variety.

The Bamboo can be won as a possible prize from the following locations: 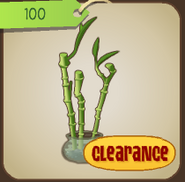 This item was cheaper on its first release.
Community content is available under CC-BY-SA unless otherwise noted.
Advertisement