The Basketball consists of an orange sphere that has one dark brown groove curving down the top of the basketball and ending at the bottom. Three similar lines arc around the sides of the basketball, overlapping the main groove. A few tiny patches of whitish dots can be seen on the surface of the ball as well. This item has no other variants.

The Basketball can be won as a possible prize from the following locations:

Winning the Basketball in The Forgotten Desert. 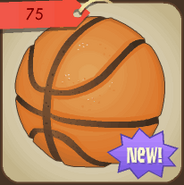 The Basketball when it was first sold in 2011
Community content is available under CC-BY-SA unless otherwise noted.
Advertisement