The Basketball Hoop consists of a wooden backboard held up by a tall wooden post. The backboard has a reddish-orange rectangle painted on it and there is a red rim with a white net secured to the front. The post for the hoop is planted in a small patch of grass and a basketball is placed off to one side. This item comes in only one variety. 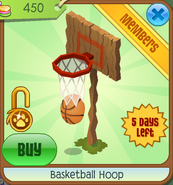 The basketball falling through the net after being clicked.
Add a photo to this gallery