The BETA Flower Bush is a members-only den item. It was released on June 18, 2013, as a prize in the Return of the Phantoms adventure during its testing phase, but it was removed after this phase on July 11, 2013.

The Beta Flower Bush consists of two different appearances - a "dying" and a "healthy" appearance. This item can be clicked to toggle between dying and healthy. The "dying" phase is the default phase which shows the bush to have wilted flowers, dark-colored curved thorn branches, and a purple smoke emanating from the bush. The "healthy" phase shows the bush to have blooming flowers and light green foliage. This item has only one variety. 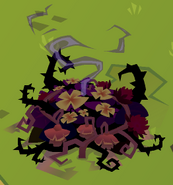 The cleaned appearance after it has been clicked.

This item seen in an inventory with its members-only badge.

Add a photo to this gallery
Retrieved from "https://animaljam.fandom.com/wiki/Beta_Flower_Bush?oldid=1307362"
Community content is available under CC-BY-SA unless otherwise noted.