The BETA Well is a members-only den item that was released on June 18, 2013. This item could be obtained as a prize in the Return of the Phantoms adventure until its testing phase ended on July 11, 2013.

The Beta Well consists of a large, stone-brick well that has dark-purple and black-purple fluid in it, overflowing over the edges of the well, purple fumes radiating out of the center of the liquid, and, along the edges of the well's base, dead grass and small flowers are poking from the seams, seeking new nourishment. However, when clicked, it magically changes into a water well that has relatively clean water, with ripples around the edges. The purple fluid has disappeared entirely, and the plants have regained a fresher health. When clicked once again, it reverts to its previous contaminated form. This item has only one variety. 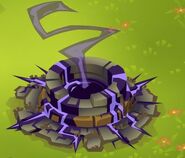 The default, polluted form of the well.

The non-contaminated, clean form of the well. 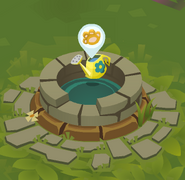 The cleaned well seen in an adventure for comparison.

This item seen in an inventory with a members-only badge.

Add a photo to this gallery
Retrieved from "https://animaljam.fandom.com/wiki/Beta_Well?oldid=1307358"
Community content is available under CC-BY-SA unless otherwise noted.