Not to be confused with the Blue Mat or the Rug.

The Blue Rug is a non-member den item that was first sold in Jam Mart Furniture during the Beta Testing. After Beta Testing ended, it became one of the default items, along with the Sturdy Table, in a player's inventory when they begin the game; however, this changed when it was relocated back to Jam Mart Furniture on March 30, 2017.

The Blue Rug appears as a circular rug that has a dark blue-gray rim around the outer edge. Towards the inside, there is an orange-yellow band with seemingly randomly placed darker stripes on it. The center is light turquoise with six russet surrounded brown spots. This item comes in only one variety. 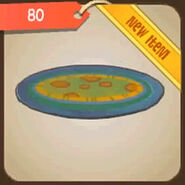 This item was sold during Beta Testing.

The unreleased green version in Jam Mart Furniture.
Add a photo to this gallery
Retrieved from "https://animaljam.fandom.com/wiki/Blue_Rug?oldid=1258967"
Community content is available under CC-BY-SA unless otherwise noted.