Not to be confused with the Drum, the Drum Set, the Bodran Drum, or the Bunny Drum.

135 Gems
The Bongo Drums are a non-member den item. They were first released at Coral Corner in February 2011 and were sold until Coral Corner closed in July 2011. They were re-released at the trading-themed Jammer Parties on December 17, 2015.

The Bongo Drums appears as a pale, clay-brown color with brownish-gold drum skin and ropes around the top. There are two drums; the bigger one is standing up with grayish blue paint around the bottom, while the smaller one is tipped on its side with moss-green paint around its base. This item comes in only one variety. 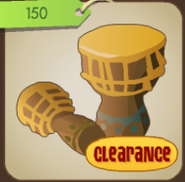 The Bongo Drums sold in Coral Corner just before the shop closed. 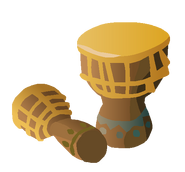 Add a photo to this gallery
Retrieved from "https://animaljam.fandom.com/wiki/Bongo_Drums?oldid=1468923"
Community content is available under CC-BY-SA unless otherwise noted.