View source
Not to be confused with the Giant Bubblegum Machine.

75 Gems
The Bubblegum Machine is a members-only den item. It was formerly sold at Jam Mart Furniture and was first released in August 2010 during Beta Testing.

The Bubblegum Machine consists of a large misshapen sphere of glass, which holds yellow, orange, blue, green, and pink gumballs. On top of the glass is a tiny red lid with a yellow bump. The glass sphere rests on the red-and-yellow machine part, which has a circular red knob in the front and a gray-colored slot beneath it where the gumballs are supposed to come out. Three gumballs lay next to it; they are in the order from left to right, of red, blue, and yellow. This item comes in only one color variety.

The Bubblegum Machine can be won as a possible prize from the following locations: 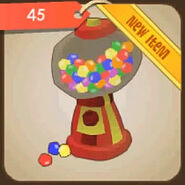 The item was sold at a cheaper price during Beta Testing.

This item in an inventory to show its name and the members-only badge.

Winning the Bubblegum Machine in The Forgotten Desert 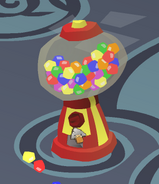 The exact location that must be clicked to activate this item.
Community content is available under CC-BY-SA unless otherwise noted.
Advertisement