The Bunny Ear TV is a members-only den item. It was released on January 5, 2017, and can be obtained from the Raccoon-Only passage in The Phantom Fortress.

The Bunny Ear TV is a blue television that has bunny-like traits. The top of the TV has a pair of bunny ears, the back of the TV has a puffy bunny tail, and there are bunny feet at the base. On either side of the TV are dark whiskers and a pair of hands, one of which is holding a carrot. This item comes in only one variety.

This item can be seen with a members-only lock. 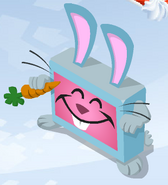 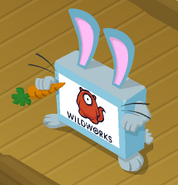 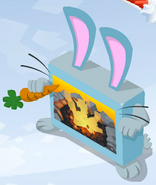 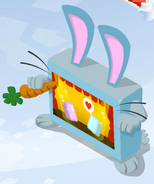 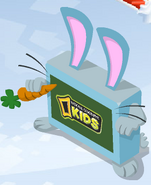 The Former Screen When Clicked Twice
Add a photo to this gallery
Retrieved from "https://animaljam.fandom.com/wiki/Bunny_Ear_TV?oldid=1251980"
Community content is available under CC-BY-SA unless otherwise noted.