Not to be confused with the Baker's Table.

The Cake Bake Kitchen is a members-only den item that was first released in December 2011. It can be bought at the blue (den item) orb, which is on the lower floor of Epic Wonders.

The Cake Bake Kitchen consists of two separate units placed next to each other. One unit appears to have four stove burners and an oven with a mitt hanging off of the side. This unit is colored light pink. The adjacent unit is a counter with two cupboards and two drawers. On top of the counter are various bowls, pans, and ingredients. The counter is colored purple and the drawers are colored brown. There are no other variants of this item. 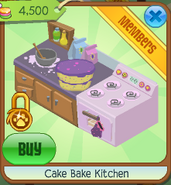 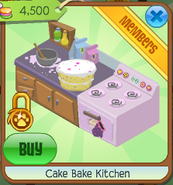 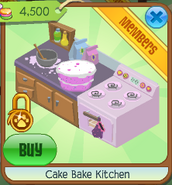 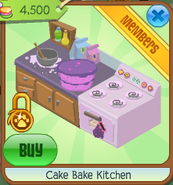 Making the pink cake with purple frosting
Add a photo to this gallery
Retrieved from "https://animaljam.fandom.com/wiki/Cake_Bake_Kitchen?oldid=1252027"
Community content is available under CC-BY-SA unless otherwise noted.