The default coloring shows a large hairy camel with a tan body, ears, and face; long and shaggy brown hair is covering the tips of its two humps, as well as its neck and head; and brown hooves tip the ends of its long legs. 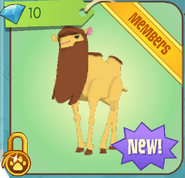 Camels, as seen in the Diamond Shop

The Jamaa Journal hint for the camel.

The Witch's Broom item has an unusual position on the Camel. 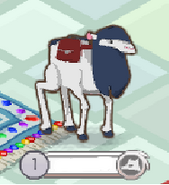 The Backpack is positioned over the side of the Camel instead of the back.

The Tie has an incorrect color around the neck.

The Rare Friendship Moustache appears above the nose instead of below it. 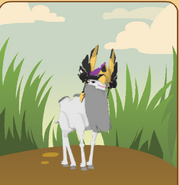 Colors are distorted when the Epic Feathered Crown is worn.

The Jamaaliday Sweater covering the fur, unlike other Animals.

The humps are shown when wearing a Summer Dress. 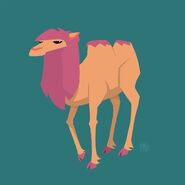 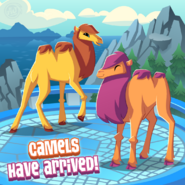 The artwork shown on The Daily Explorer
Community content is available under CC-BY-SA unless otherwise noted.
Advertisement