30 Gems
Cami's Frog is a non-member den item that was released sometime during August 2010 in Jam Mart Furniture during the Beta Testing.

Cami's Frog appears as a pale, mint-green plushie that resembles a frog sitting up, with its arms at its sides. It has two white eyes with small black pupils and two small black dots for nostrils. It also has a long, thin black half-smile. The frog appears to have a lavender-colored patch sewn on its stomach with brown stitches all around it and a bright, hot pink bandage. Just like a real frog, it appears to have webbed feet. This item comes in only one variety.

The Cami's Frog can be won as a possible prize from the following locations: 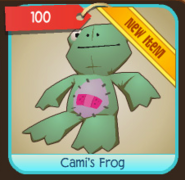 This item sold during Beta Testing.

Cami's Frog being won in The Forgotten Desert adventure.

It can be seen as a decoration in the Wild Explorers Tent.
Community content is available under CC-BY-SA unless otherwise noted.
Advertisement