This article is about the den. For the pet item based on it, see Pet Castle.

The Castle is a members-only land Den. It was first released during September 2010, soon after Beta Testing ended. It is currently sold at the Den Shop.

It consists of a large, medieval-themed stone castle with two balconies, a wooden drawbridge, a flowing moat, a main room with an entrance, a basement, and a large field with a clear, dirt pathway. The inner walls are stone bricks, while the floor is made entirely out of cobblestone.

Receiving the Castle from the King of the Jungle Membership Card. 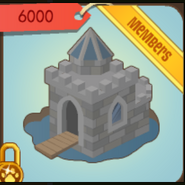 The Castle's original appearance in stores.
Community content is available under CC-BY-SA unless otherwise noted.
Advertisement