120 Gems
The Chicken Hat is a members-only land clothing item that is worn on the head. It was originally released during Beta Testing in Jam Mart Clothing. It was eventually relocated to the Conservation Museum after October 10, 2013. It was put on clearance on April 21, 2018, and left stores on May 1, 2018. It was re-released on May 10, 2018.

The Chicken Hat appears to be a thin-necked chicken with protruding buttons for eyes. This item has stitch-marks on its chest, showing that it was sewn together. The chicken has three things on its head. There is a rectangular patch on the neck, which is sewn with protruding stitches. This item comes in eight different varieties.

The Chicken Hat can be won as a possible prize from the following locations: 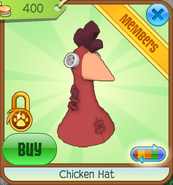 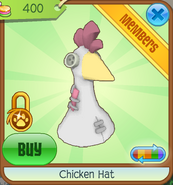 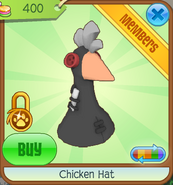 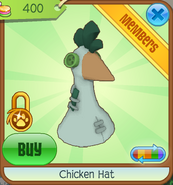 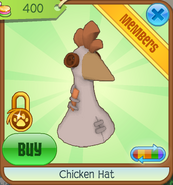 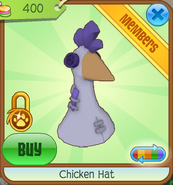 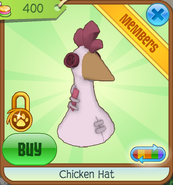 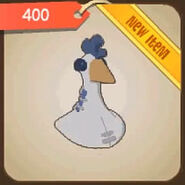 The Chicken Hat as seen during Beta Testing
Community content is available under CC-BY-SA unless otherwise noted.
Advertisement