300 Gems
The Clover Gauntlets are a members-only land clothing item that is worn on the legs. They were first released on March 5, 2015, and are sold in the Diamond Shop around the time of Lucky Day. A darker-green variety replaced the original on March 2, 2017.

The Clover Gauntlets are a set of two green boots and two green gloves that each have light accents around the edges. The gloves have layered, scale-like plates along the fingers with long wrist guards and a green clover emblem on the top of one glove. The boots consist of sharp, light accent claws at the toes with a layered, plate-mail-like armor up to the ankles and round knee guards. When worn, animated coins stream up from the ground all around the animal. This item has two varieties, one of which is a rare variant. 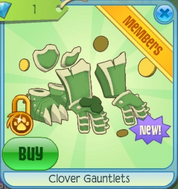 The original item when it was sold.

The updated name of the original item.

The original item with its added "Rare" tag.

The animation and damage done when attacking with the Rare Clover Gauntlets.

The animation when attacking with the newer Clover Gauntlets.
Add a photo to this gallery