View source
This article is about the music. For the place, see Club Geoz.

300 Gems
Club Geoz is a non-member music item for Dens. It was released in July 2016 and can be obtained by redeeming a promotional code that comes with the Club Geoz Playset Jazwares Toys. It was released to stores on June 16, 2022, at the Play Wild Party.

The cover shows a purple and white checkered dance floor lined with a shiny cyan color. A flashing disco ball is above it, as well as five sets of music notes.

This song has a fast, upbeat tempo with elements of jazz and rock. The main melody is played initially by a saxophone, but it later changes into a synthetic electronic instrument. Some other instruments in the background include a bass guitar, a record scratched on a turntable, a cowbell, a drum set, and other various electronic noises. There is a voice that says "DJ" a few times, and near the end says, "This DJ is so funky, man!". 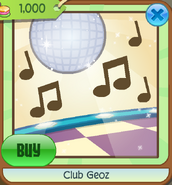 The item sold in stores.
Community content is available under CC-BY-SA unless otherwise noted.
Advertisement