Codes are bonuses that reward the player with Gems, Diamonds, Membership or items. They can be found in the National Geographic Kids Magazine and Almanac/Infopedia, and are occasionally featured on the Daily Explorer. Other ways codes are distributed are from the Jam-A-Grams AJHQ sends on special occasions, such as holidays. Each code may only be used once, and both non-members and members are able to use codes. These codes can also be found by buying something from AJ Outfitters,

Most codes are not case-sensitive and can be entered with either uppercase or lowercase letters. Players may enter codes by simply clicking on the "Enter Code" button located inside the My Settings menu while playing in-game. 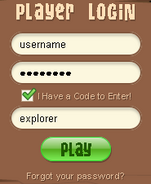 An example of entering a code during login.

This screen appears after clicking the "Need Help?" button on the Redeem A Code screen.

An example of a code advertised in The Daily Explorer.

One of the security check pop-ups.

A glitch where the security check images do not load.

A pop-up when a player tries to enter an expired or nonexistent code. 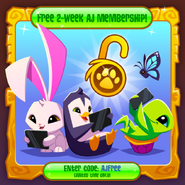 A photo announcing the AJFree code.

A post in the Jamaa Journal announcing the "thankyou" code.