Cosmo is the Alpha of the Koalas. He was introduced in 2010 as one of the first six Alphas, but his first appearance in the game was as a statue released in 2011. He was not actually seen in the game until the Meet Cosmo Adventure was released in 2013. In the Adventures, he is responsible for the invention of Boomseeds and Chomper Plants to help battle the Phantoms.

Cosmo is a pale reddish-brown koala with even paler marks and underside. He has amber eyes, a dark gray spoon-shaped nose, and four white flecks above each of his eyelids. He has paler fuzzy eyebrows and a reddish-brown beard in the Beta Testing artwork. He has an old witch-pointed olive-green hat with a daisy on the top and a sandy-brown patch on the front middle part. He has an olive-green moss skirt and carries around a thick wooden staff topped with an azure-colored horn with a candle attached to it.

In the Call of the Alphas novel, he is often found talking to the plants, trees, flowers, and shrubs, treating them no different from the animals of Jamaa. He can hear them and speak to them like any normal person having a simple conversation.

Meet Cosmo: Cosmo first appears in this Adventure where he greets the player warmly at the beginning, where he then talks about the new potion he has invented. The Player helps him make this potion to create the Boomseeds, a weapon that can blow up Phantoms. He then helps the player by partly guiding them through the rest of the Adventure.

The Hive: He appears again in this adventure, where he greets the player at the start, saying that he will meet them up ahead. When the player meets Cosmo again and learns about Greely being in the same cave, he is confused because Greely didn't tell the other alphas that he would be there. At the end of The Hive, he congratulates the player on defeating one of the Phantom Kings.

The Great Escape: In The Great Escape, he appears at the start and comes up with a crazy idea in which the player gets captured and then destroys the Phantom fortress from the inside. At the end of The Great Escape, after the Player tells him that they saw Greely at the top of the tower before the volcano erupted, Cosmo seems worried and tells the Player that the alphas will figure out a plan, as well as have a talk to Greely about his solo missions.

The Search For Greely: In The Search For Greely, Cosmo, along with Liza and Graham, ambush Greely's hideout. At the end of the adventure, when the player and the alphas meet Greely, Cosmo questions him and furiously claims that Greely betrayed them. When Greely explains his motives and reveals the Phantom Beacon, Cosmo seems confused by it and wants more evidence that such a silly myth actually exists.

Turning The Tide: He only appears at the very end of Turning The Tide, where he expressed surprise that the player managed to save the Bottlenose Brigade and Tavie, the Alpha of the Dolphins, as well as intercept the tail replacement Graham made for her. When Cosmo is talked to again he thanks the player for their assistance and mentions that the ocean finally has time to heal after the Phantom's wicked ways.

The Mystery Below: He appears at the start of the adventure along with Graham, exploring the area of the map in The Trials of Zios. After exploring the cave with crystals and going through the passageway, he appears once again in the tunnel that reveals the hidden city, to which he responds with surprise. At the hidden city, he realizes that Zios made it so that the archive, the trials, and the crystal cave were only accessible by Jammers.

The River's Heart: Cosmo appears at the end of the adventure with all the other land Alphas, scolding Greely for stealing the strange stone from the Alpha Headquarters. He then realizes that Greely was right after he discovers with the Alphas that the strange stone is a heartstone. He then says he found new plants in the area.

The Invention of Boomseeds- Although Graham is the Alpha who is best known at inventing things, Cosmo invented the boomseeds to fight against the phantoms. It is most likely that Cosmo is the alpha who spawns the boomseeds while a player is on an adventure. 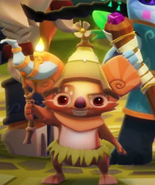 Cosmo from the Beta Testing 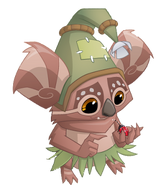 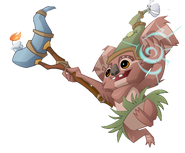 Cosmo on The Daily Explorer. 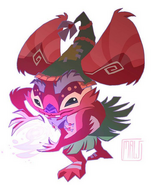 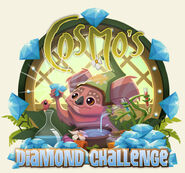 Info about Cosmo from Alpha Headquarters. 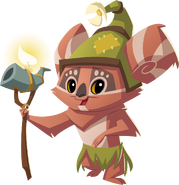 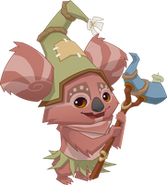 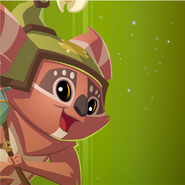 Cosmo artwork in The Daily Explorer. 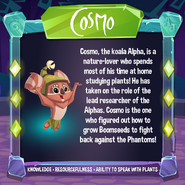 A description of Cosmo in The Daily Explorer.

An unused 3D model and animation of Cosmo by Mac McCann
Community content is available under CC-BY-SA unless otherwise noted.
Advertisement