Dens
The Den Shop is located at the North-West part of Coral Canyons. A shop that was introduced on July 19, 2012. It sells land Dens and some underwater Dens. On March 6, 2014, an underwater version of this shop was added to Deep Blue, where only ocean dens are sold. A Jammer can also access it indirectly from editing their den by clicking on the "Switch Your Den" tab and then selecting an empty slot, where they are able to buy both land and ocean dens.

The Den Shop in Coral Canyons is a small structure that is built into the side of the cliff. It has a cobblestone base with a wooden frame and an arched roof. There is a large window in the center of the building with a striped awning above it, which is supported by sticks on either side. In front of the shop is a wooden stool with miniature den models on display. On the other side of the shop is a sign with drawings of dens on it.

The Den Shop in Deep Blue is a small sunken ship that has a window in the side of it. Bright lights shines from inside the window and there is a red and white "Sale" sign above the window. A small wooden sign is placed outside the shop with a castle-like drawing on it.

The Den Shop in Coral Canyons sells both regular land dens and the dens that are sold at the Diamond Shop.

All of the Diamond Shop dens are members-only.

The Den Shop in Deep Blue only sells underwater dens. 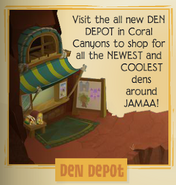 The Den Shop announced as the Den Depot in the Jamaa Journal. 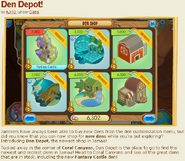 The old blog post from the Daily Explorer where AJHQ announced this shop as the "Den Depot" even though the picture shows the correct name. 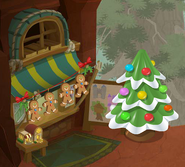 The Den Shop in Coral Canyons decorated for the Jamaalidays. 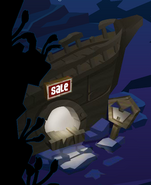 The Den Shop in Coral Canyons after it was updated to include Diamond Shop dens.
Community content is available under CC-BY-SA unless otherwise noted.
Advertisement