They appear as light-blue, diamond-cut gemstones that sparkle with lighter top highlights. The official artwork for Diamonds matches their appearance in-game, but it often shows them in various sizes.

Diamonds are primarily obtained from the Daily Spin (for non-members), the Member Spin (for members-only), and the weekly contests that AJHQ holds. After 2013, the Jamaaliday Gift Calendar started including Diamond gifts on certain days as well. They can also be earned through selling items for Diamonds with the My Shop den item.

Jammers can purchase a Diamonds Gift Certificate from Animal Jam Outfitters that will reward them with bonus Diamonds in the game. These are available in amounts of 10 Diamonds, 25 Diamonds, or 75 Diamonds.

An advertisement for diamonds in The Daily Explorer 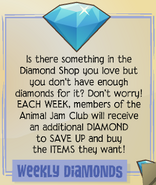 A short explanation of weekly Diamonds in Jamaa Journal Volume 88

The page about Diamonds in the Jamaa Journal

The initial answers to questions about Diamonds in the Jamaa Journal

Receiving Diamonds from a 3-month Membership

The pathway that leads up to the door of the Diamond Shop is made of Diamonds.

The plants in the Diamond Shop are covered in Diamonds.

Getting 6 diamonds on the Member Spin

An advertisement for the "Black Friday" Diamond Sale when purchasing membership

The pop-up that shows when a player wants to buy a diamond item.

A pile of Diamonds 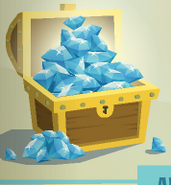 A chest full of Diamonds 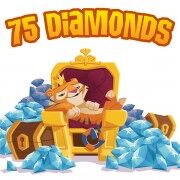 A Tiger with 75 Diamonds 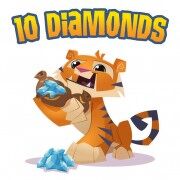 A Tiger with 10 Diamonds