Start a Wiki
This article is about the item. For the game, see Double Up.

Double Up is a members-only den item and the den version of the mini-game Double Up. It was first released in November 2011 at the Mystery Emporium and was relocated to the Sol Arcade upon its introduction in February 2012.

The Double Up item appears as an arcade system that has a rectangular base with a coin slot in the front and a joystick with three buttons in the center. The top of the system has a large screen that displays an animated game controller (Animal Jam's icon for a mini-game). The entire machine is painted light grey with various images from the game itself such as the countdown timer, the wall art, and the animals. This item has only one variety. 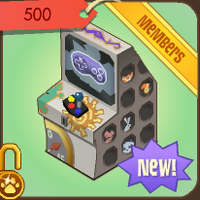 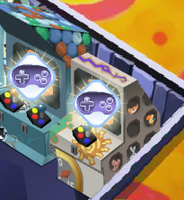 Double Up displayed at the Sol Arcade
Add a photo to this gallery
Retrieved from "https://animaljam.fandom.com/wiki/Double_Up_(Item)?oldid=1252505"
Community content is available under CC-BY-SA unless otherwise noted.