300 Gems
The Elegant Boots are a members-only land clothing item. They were released as part of Dark Moon Bundle and obtained by buying a membership on the Animal Jam website during October 2019. They were later released in the Diamond Shop.

The item is two pairs of boots with the front boots being white with a gray stripe near the top; the hind boots are pink with flaps on the hem. This item originally came in one variety, but was given one more after its release in the Diamond Shop. 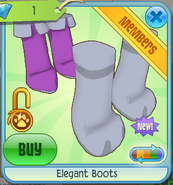 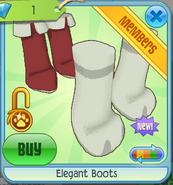 Add a photo to this gallery
Retrieved from "https://animaljam.fandom.com/wiki/Elegant_Boots?oldid=1349131"
Community content is available under CC-BY-SA unless otherwise noted.