The Epic Penguin Plushie appears as a large dark-grey plushie that is based on the Penguin animal. It has large green eyes, a wide orange beak, and flat orange feet. The front of the plushie has a large patch of white extending from its face down to its feet. There is an "AJ" Badge down low on its side. When clicked in a den, the plushie bounces up into the air and folds into a ball similar to how the Sidekix Plush can be folded into a ball. When the Plushie is folded into a ball, the animal's footprints appear around the outside of the ball. This item comes in only one variety. 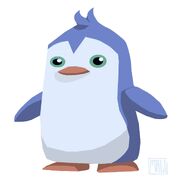 Concept art by Taylor Maw
Add a photo to this gallery
Retrieved from "https://animaljam.fandom.com/wiki/Epic_Penguin_Plushie?oldid=1372273"
Community content is available under CC-BY-SA unless otherwise noted.