View source
This article is about the shop. For the place, see Epic Wonders (Place).

Clothing Accessories & Den Items
The Epic Wonders is a shop that sells clothing and den items that are generally much more expensive than the items sold in other stores around Jamaa. It is located behind the waterfall in Coral Canyons and it was introduced on December 1, 2011.

There was a glitch where the clothing items could appear as solid magenta, but they could not be purchased. This occurred if the player was previewing a non-default color variant of an item while on a non-default sorting option. If the player then clicked one of the sorting buttons such that an item with fewer color variants aligned in the same slot as the previewed item, when they finally clicked the close-up magnifying glass button they would see a solid magenta variant that wasn't actually available.

An example of the den items pop-up screen 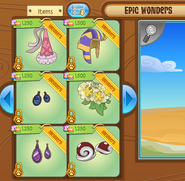 An example of the clothing accessories pop-up screen
Community content is available under CC-BY-SA unless otherwise noted.
Advertisement