View source
This article is about the shop. For the place, see Forgotten Archive.

Land Clothing
Forgotten Relics is a clothing shop located within the Forgotten Archive under the stairs. The shop sells items that are decorated with Zios and Mira symbols. This shop was introduced on September 14, 2017.

All of the items sold here cost 750 Gems. 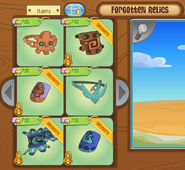 The preview window that shows this shop's name
Community content is available under CC-BY-SA unless otherwise noted.
Advertisement