150 Gems
The Fountain is a members-only den item. It was first released in Jam Mart Furniture during Beta Testing. It was then relocated to Coral Corner in February 2011, but it was removed when the shop was closed in July 2011. It was re-released in the Party Shop at the trading-themed Jammer Parties on December 17, 2015.

The Fountain has a reddish, clay-colored basin with a long stalk-like pedestal holding a smaller basin bowl and an aquamarine colored fish with a few shown scales, turning so that it is facing the sky with its mouth wide open. Blue water flows out of its mouth and fills the two basins. This item comes in only one variety. 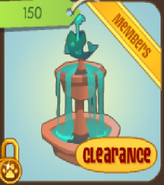 The Fountain, as sold at Coral Corner at cheaper price 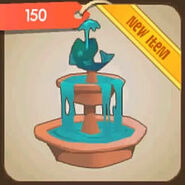 The Fountain when it was sold during Beta Testing

a gif of the item
Add a photo to this gallery
Retrieved from "https://animaljam.fandom.com/wiki/Fountain?oldid=1364702"
Community content is available under CC-BY-SA unless otherwise noted.