View source
Not to be confused with the Rare Frankenstein Mask.

90 Gems
The Frankenstein Mask is a non-members land clothing item that is worn on the head. It was released on October 11, 2012, at the Haunted Forest Shop and returns annually for the Night of the Phantoms. In 2015, the item was added as a prize to Bitter Sweets and was later relocated to the New Year's Shop.

The Frankenstein Mask is square-shaped and resembles the face of Frankenstein's monster. The face has hair on the top, and just under the hair there are three stitches across the forehead. It has angry-looking eyes, a large nose, and a small mouth. On either side of its neck it has two bolts holding on the head, one of which has a small lightning bolt coming from it. This item comes in eight different varieties.

The Frankenstein Mask can be won as a possible prize from the following locations: 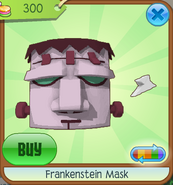 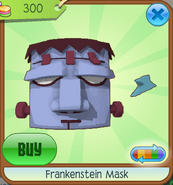 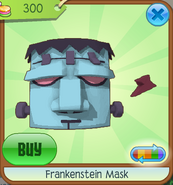 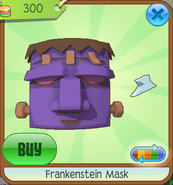 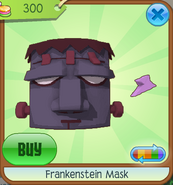 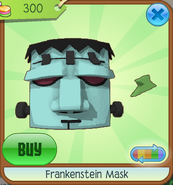 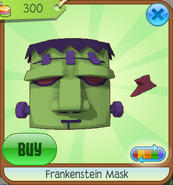 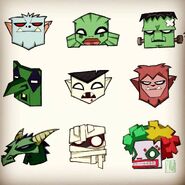 Concept art for the Frankenstein Mask and others by Taylor Maw
Community content is available under CC-BY-SA unless otherwise noted.
Advertisement