45 Gems
The Freedom Hat is a non-member land head item. It could have been purchased from Jam Mart Clothing and was first released sometime during June 2011. It returned as part of one of the Hat Shops during Hatapalooza in January 2013 and then again in May 2017. It returned to Jam Mart Clothing in June 2018, and on June 22, 2021, but left on August 2, 2021.

The Freedom Hat is a hat with red and white stripes, white top, blue buttons, and a blue band. This item only comes in one variety.

The Freedom Hat can be won as a possible prize from the following locations: 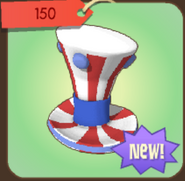 The actual price when not on sale 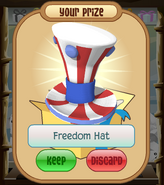 Winning the freedom hat from the claw machine

The glitch that used to occur when the Pig played while wearing the freedom hat.
Community content is available under CC-BY-SA unless otherwise noted.
Advertisement