150 Gems
The Fridge is a members-only den item. It was first released on July 29, 2012, and it was formerly sold in Jam Mart Furniture. It was most recently removed from the store on September 14, 2017.

The Fridge is made of wood with the appearance of a tree trunk. It has a drawing and letters attached to the two doors. When activated, the doors open to reveal food inside the fridge. This item comes in one variety.

The Fridge can be won as a possible prize from the following locations: 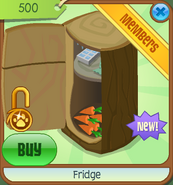 Winning the Fridge in The Forgotten Desert
Community content is available under CC-BY-SA unless otherwise noted.
Advertisement