View source
Not to be confused with the Scary Antlers, Rare Gazelle Horns, Rare Friendship Horns, or Golden Gazelle Horns.

75 Gems
625 Gems (Rare Item Monday)
The Gazelle Horns is a members-only land clothing item that is worn on the head. It was formerly sold at Jam Mart Clothing and was first released sometime during the Beta Testing. It went on clearance shortly after Beta Testing ended, but then returned to stores in 2014. It went on clearance and was removed once again on July 26, 2017. It once again returned to Jam Mart Clothing on May 20, 2018.

The Gazelle Horns appear as a pair of two-tone, spiral-shaped horns, with a twisted look, that looks like a gazelle's antlers. This item comes in nine different color varieties, including the rare variant.

The Gazelle Horns can be won as a possible prize from the following locations: 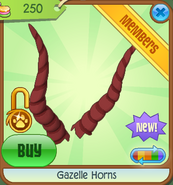 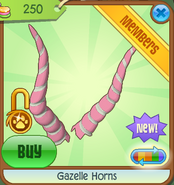 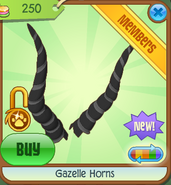 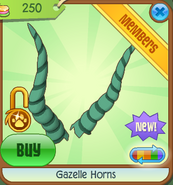 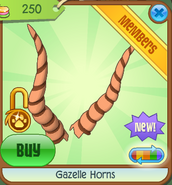 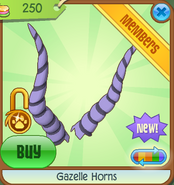 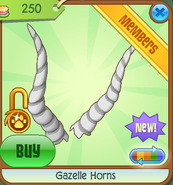 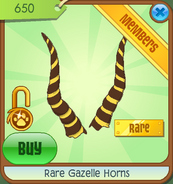 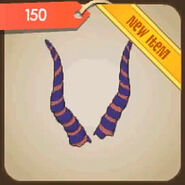 The light brown variant with purple-grey stripes that was seen during the Beta Testing.

A Kangaroo wearing the Rare Gazelle Horns while moving.
Community content is available under CC-BY-SA unless otherwise noted.
Advertisement