Gems appear in the game as sparkly coins that are either blue, orange, green, purple, or pink. In advertisements and games like Four Gem however, they have a wavy pattern on them and appear in additional colors such as yellow and red.

Gems can be earned from Games, Adventures, the Safety Quiz, the Daily Spin, Member Spin, and by recycling items. Also, Jammers can purchase Gems using Diamonds at the Diamond Exchange. Certain codes can be used to reward Gems when Jammers login, but these can only be used once per player.

Many membership deals come with a different amount of Gems depending on the length of the membership. Purchasing a membership directly from the main website offers choices of 1 month with 1,500 Gems and 5 diamonds, 6 months with 9,000 Gems and 35 Diamonds, and 12 months with 25,000 Gems and 90 Diamonds. Jammers can also purchase Membership Gift Certificates, much like the Gems Gift Certificate, from Animal Jam Outfitters; these membership certificates include a 3-month membership with 6,000 Gems and 10 Diamonds, an offer that is not available from the main website. Also, most of the retail membership gift cards include some form of Gems bonus. For example, the Lion, Arctic Wolf, and Snow Leopard promotional retail gift cards provided a 15,000 Gems bonus.

Gems are almost always used to purchase something in the game. Most items bought in the various shops for clothing and furniture can range between 100 to 800 Gems on average, with a few outliers such as the deleted Skully, which had cost 10 Gems when it was available, and the Three Horned Armor, which costs 1,500 Gems. On Rare Item Mondays, the rare items in question normally cost 700 Gems or more. Epic Wonders items usually cost much more than the items sold in the other shops: between 1,250 and 2,500 Gems, although some items cost much more such as the Gold Brick that costs 10,000 Gems, making it the most expensive item in the game.

Certain mini-games, such as Phantom Invasion and The Claw, actually require Gems to play them because they reward items if the player wins.

An example of the currency list when the Gems icon is hovered over.

An example of the Gems icon at the top of the Change Your Look menu.

An example of the Gems counter at the bottom of a shop window. 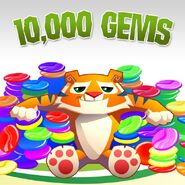 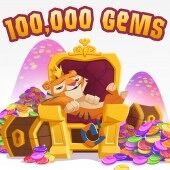 The Gems currency symbol is shown on the Phantom Ball mini-game.

The message players see when they are granted gems

Winning gems as a prize

The original concept art for blue, green, and red Gems

The standard, small pile of Gems

A medium pile of Gems

A large pile of Gems

A chest full of Gems

A small chest full of Gems 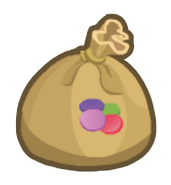 Pile of gems
Community content is available under CC-BY-SA unless otherwise noted.
Advertisement