The Giant Magnet is a members-only den item that was first released on January 21, 2015. It returned to Jam Mart Furniture for a second release on July 9, 2017, but was later removed on February 21, 2018.

The Giant Magnet appears, hence its name, like a large, red magnet shaped like "U" with silver ends at the top. When clicked, it shakes rapidly with blue electricity and starts to levitate as different metals stick to it, such as paper clips and screws. This item comes in only one variety. 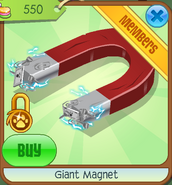 The action it does when it is clicked.
Add a photo to this gallery
Retrieved from "https://animaljam.fandom.com/wiki/Giant_Magnet?oldid=1253122"
Community content is available under CC-BY-SA unless otherwise noted.