300 Gems
The Giant Rare Plaque is a non-member den item that was released sometime during December 2018, obtainable as a promotional gift from redeeming a code from the winter 2018 Animal Jam Box.

The Giant Rare Plaque appears as a giant golden plaque with the text "Rare" on it in a dark golden color, and four circular screws/bolts on each corner of the plaque. It has two light, golden highlights streaking down around the middle of the item. It gradually fades from a dark gold to a light, yellow-ish gold. This item comes in only one variety. 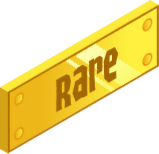 The item as seen on a player’s trade list.
Community content is available under CC-BY-SA unless otherwise noted.