The Glitchy TV is a members-only den item. It was first released on September 4, 2015, and was formerly sold in Jam Mart Furniture.

The Glitchy TV consists of a pixelated looking flatscreen TV on a purple-blue TV stand, the latter of which has pixels that momentarily disappear and then come back. The TV itself will appear to 'glitch' forwards and then go back the way it was. The colored frame around the TV and on the bottom of the stand is slightly transparent. When the screen is clicked, the TV turns on and cycles between three views with a periodic, animated gray line moving across colored bars similar to a color test card, animated static consisting of small gray squares, and finally a white message in an unknown script on a black screen. This item has eight varieties. 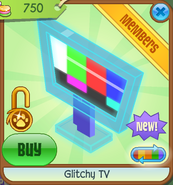 The TV while on the color test screen. 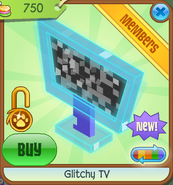 The TV while on the static screen. 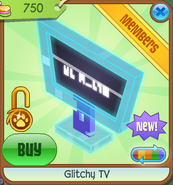 The TV while on the white message screen. 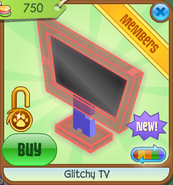 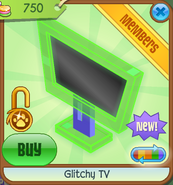 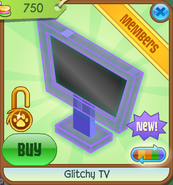 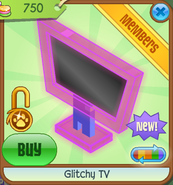 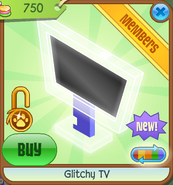 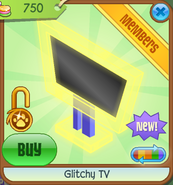 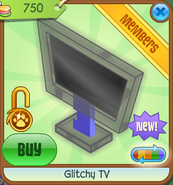 Add a photo to this gallery
Retrieved from "https://animaljam.fandom.com/wiki/Glitchy_TV?oldid=1253227"
Community content is available under CC-BY-SA unless otherwise noted.