Greely is the Alpha for Wolves. He was introduced in 2010 as one of the first six Alphas, but his first appearance in the game was as a statue released in 2011. He was not seen in the game until The Hive Adventure was released in 2013.

Greely is a blue-grey wolf, with a light blue underbelly (depends on artwork variants). He has yellow eyes or reddish-brown in adventures; in his beta artwork, he had white eyes and a ruby in his left eye. He has white tufts as eyebrows, and three blue spots under his eyes (assumed to be markings). The ruff on the back of his neck/head is very ragged and darker than the rest of his fur. He wears a gold chain (bronze in adventures) around his neck that latches to his cape. His cape/cloak is normally a dark purple color and is worn down with lots of tears in it. He wears four bands on his forepaws, two on each one. He has a leather brace on his tail. All of these descriptions are based on artwork, so it can be different from what is listed here.

In the Call of the Alphas novel, he is found lurking and always hiding in the shadows observing and shrouded in mystery. Whenever he is talking, his words are always short, directly to the point, and emotionless. There are times where his actions and decisions seem to be helping the Phantoms more than the Alphas; however, he always stands by the Alphas in tight situations when all hope seems to be lost.

The Hive: Greely's first appearance is in this Adventure. He is seen near the start of the Hive and urges the Player to turn back. When the player mentions Greely to Cosmo, Cosmo seems shocked to know that Greely was in the Hive.

The Great Escape: Greely's second appearance was when he is sitting on the balcony that is at the top of the Great Tower. He reveals what the Phantoms are planning and once again, he tells the player to go back and stop interfering. At the end of this adventure, when the player tells Cosmo where they saw Greely, Cosmo seems partly cross and shocked at what Greely is putting himself into.

Greely's Inferno: He appears near the end of this adventure and seems to lecture the player for causing too much attention. Greely then finally accepts help and tells the player to distract the Phantom King while he tries to stop the volcano from erupting. After the Phantom King flees, Greely thanks the player, mentions that there was an omen that a brave Jammer would save Jamaa, believing the Jammer is, in fact, the player and apologizes for being harsh on the player. When the volcano starts to erupt, Greely forces the player to escape while he tries to stop the volcano. He succeeds, but at the cost of his life, or so as believed. Greely is then mentioned by Liza, Cosmo, and Graham as a hero of Jamaa, along with the player.

The Search For Greely: In this adventure, Graham leads a team of Monkeys to find Greely and he accepts the player's help in finding him. Greely is later found trapped inside a giant transparent phantom case. After the player defeats the two Phantom Kings, Greely thanks the player for saving him and adds that he didn't know there were two Phantom Kings in the Phantom Vortex. He then tells the player to meet him at the end of the Phantom Vortex at the Phantom Portal. However, Liza, Cosmo, and Graham then ambush Greely believing he is a traitor after the Monkey search party's evidence found in Greely's diaries. Greely quickly reassures them that he was working undercover and brings up a conversation about a place where the Phantom Kings met, a place which is called the Phantom Fortress. When this adventure ends, when Graham is talked to, he will say that he doesn't see Greely as a hero anymore and is highly suspicious of him.

Turning The Tide: Greely only appears at the end of this adventure. Where he pressures the freed Tavie into telling him what the Phantoms' plans are if she knew them, which Tavie denies she knows anything. When spoken to again when the Turning The Tide ends, Greely admits that he was traumatized when he was captured by the Phantoms and shows sympathy towards Tavie, thinking she might be traumatized as well.

Battle for the Beacon: Greely appears in the Hidden Hollow, the small town in the center of the adventure. He tells the player that the Phantoms have been trying to get back the Phantom Beacon and that the phantoms are launching an attack. After the player has defeated the phantoms he will tell the player to water all the chomper plants in case of the Phantoms attacking again.

The Front Lines: Greely appears to the player if they travel through a certain hidden passage. He tells the player that the earring in the pool belongs to Peck.

The Phantom Fortress: Greely disguises himself as a Sheep to infiltrate the Phantom Fortress. Before he can enact his plan, however, the player in the adventure unlocks the cell where he is kept, revealing his true identity. Greely then improvises and instructs the player to escort the Sheep to safety instead.

Storming The Fortress: Greely is seen in the Engine Room of the Phantom Fortress, probably to shut down the fortress. however, the player reaches the engine room and ends up making the alarms go off. Greely tells the player to destroy the engine while he fends off any phantoms. after the player successfully destroys the engine cores, Greely is confused as to why the Engine is still going. The goop then turns pink and stops as Peck appears. Greely reveals that he had been tracking Peck since her disappearance and disappears soon after to escape the Fortress before it blows up.

The River's Heart: In this adventure, Greely had stolen the strange stone from the Alpha Headquarters. He thought it was wrong that the other Alphas were keeping it to study it and decided to steal it and bring it back to where it belongs. Just as he finishes preparing the raft, the player encounters him. He asks the player to help him as they had been trustworthy in the past and vanishes. He later appears when the player reaches a phantom gate with a hidden valve. Greely tells the player that the phantoms are trying to ensnare the raft and stays with the raft until the player recovers the valve. After guiding the raft down the river, some more phantoms appear. Greely appears suspicious about how easy guiding the raft down is and tells the player to continue escorting the raft while he stays behind and makes sure no phantoms are following. The player continues down the river until Peck comes out of the bag and phantoms start their ambush. When the ambush is over, Greely catches up to the player out of breath from fighting two phantom kings. Peck gets on to Greely about doing things alone and Greely promises he will ask for more help often. After the raft reaches its destination and Greely gets a stern talk from the other alphas, Greely realizes that some discoveries are better with friends.

Teleportation: Like the rest of the alphas, Greely can teleport from one place to another. When he teleports, a blue light appears, looking like a torch. However, Greely gets captured by the Phantoms during The Search For Greely and cannot use the teleportation powers to escape for some unknown reason.

Ice Powers: In Greely's Inferno, as soon as the volcano erupts, Greely somehow uses ice to freeze the lava from the volcano.

Phantomizer: In The Search for Greely, it is discovered that Greely has made a machine to disguise himself as a phantom and get inside the Phantom Vortex. 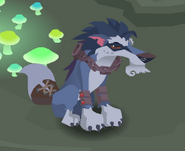 The first appearance of Greely in the Adventures

Greely disguised as a Sheep

Info about Greely from Alpha Headquarters. 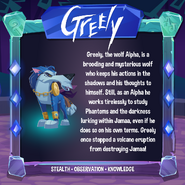 More info about Greely in The Daily Explorer. 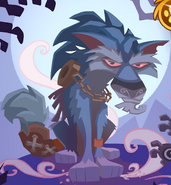 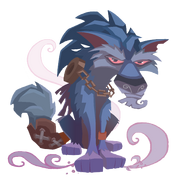 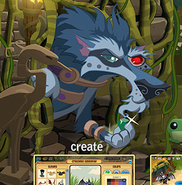 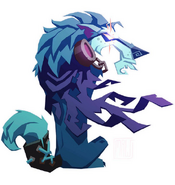 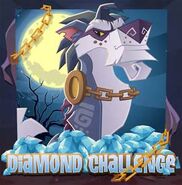 Greely making an appearance from one of Animal Jam's Diamond Challenges 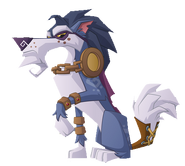 Greely on The Daily Explorer. 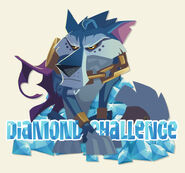 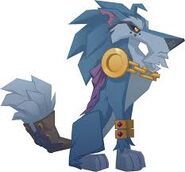 Greely with a party hat (and not looking very happy) on the Animal Jam main page.

Greely on the Jamaaliday version Homescreen 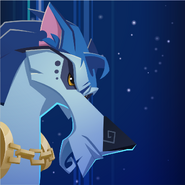 Greely artwork on The Daily Explorer.
Community content is available under CC-BY-SA unless otherwise noted.
Advertisement