Alphas (allies), Seals (allies), Phantoms (enemies)
Harper is believed to be the Alpha of Seals. They were introduced during 2011 via a den item that represented them.

Harper appears as a normal Seal, with round puffy cheeks. They are depicted with solid-colored eyes and thin eyelashes. They also have a large pointed nose, thick markings underneath their eyes, and a little tuft of fur on their head. 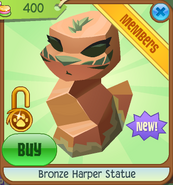