View source
Not to be confused with the Rare Headdress.

60 Gems
640 Gems (Rare Item Monday)
The Headdress is a members-only land clothing item that is worn on the head. It was first released in Jam Mart Clothing sometime during November 2010. It then returned to stores the following year on November 8, 2011, but went on clearance before the 2011 Jamaalidays. It was discontinued by AJHQ and has never returned ever since.

The Headdress consists of a patterned headband that covers the forehead and has a knob on either side. A cascading arc of many long and slightly tapering feathers are attached to the headband. Each feather has one color for the majority of its length and another accent color for the tip. The feathers start upright at the center of the headband and curve backward and bend down as they reach the sides. This item has nine varieties. 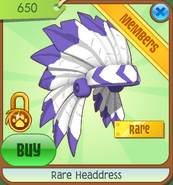