150 Gems
The Heart Target is a members-only den item that was first released in January 2015. It can be won as a prize after delivering the set of 30 valentines in the Special Delivery adventure.

The Heart Target appears to be an archery target that is shaped like a heart instead of a circle. The target is made from wood and is held up by three wooden boards. The front of the target has a series of concentric heart-shapes that are a dark magenta color on the outside and become a lighter pink color towards the center. On the ground around the target are small tufts of grass and there is a red arrow with a heart-shaped arrow head lying in front of the target. This item comes in only one variety.

There are six additional color varieties that are part of the game files, but they have never been released and they cannot be obtained by any legitimate means.

The item shown with the members-only lock. 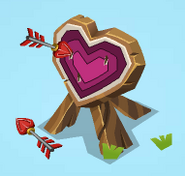 An arrow hitting the target when it is clicked in a den. 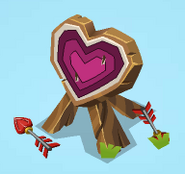 An arrow missing the target and landing in the grass when it is clicked in a den.
Add a photo to this gallery
Retrieved from "https://animaljam.fandom.com/wiki/Heart_Target?oldid=1259447"
Community content is available under CC-BY-SA unless otherwise noted.