View source
This article is about the shop. For the building that houses the shop, see Jam Mart Clothing (Place).

Clothing Items
Jam Mart Clothing is a shop that sells land clothing items. It was released during the Beta Testing and is the main shop to purchase basic clothing items as well as occasional seasonal ones.

There are currently no items on clearance.

There are currently no beta items on clearance. 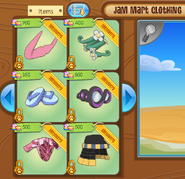 An example of the shop pop-up screen

The glitch where an item shows twice in the shop.
Community content is available under CC-BY-SA unless otherwise noted.
Advertisement